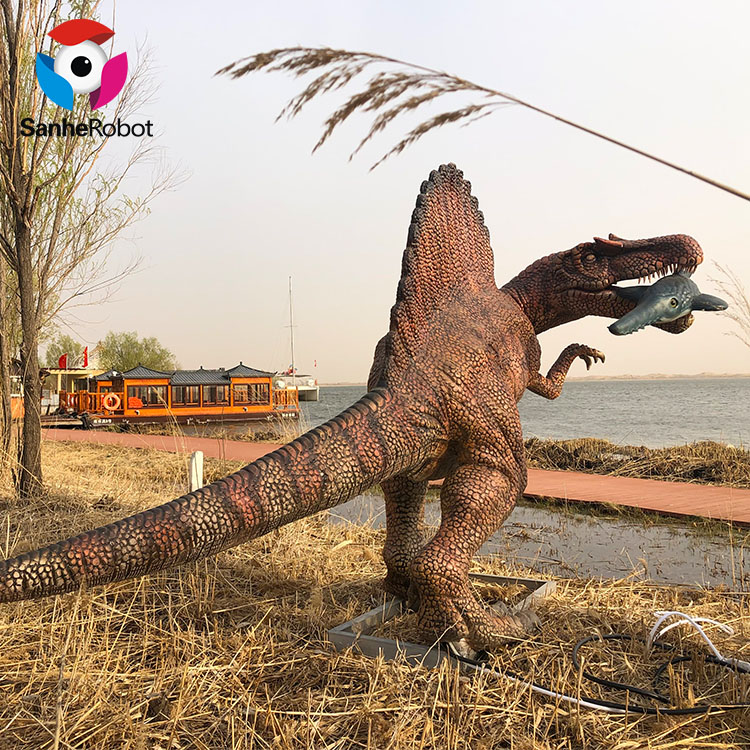 dino statue     dino sculpture     animated dino     animatronic dino amusement artificial dinosaur   amusement dinosaur sculpture  amusement park animated dinosaurs  amusement park dinosaurs replicas  amusement park exhibition model  amusement park life size animatronic dinosaur  Amusement park life size dinosaur  mechanical dinosaur  life-size simulation dinosaur  dino for exhibition  animated dino  dinosaur world  dinosaurs made in china  jurassic theme park  moving dinosaur animations  sanhe robot  amusement park animatronic dinosaur  mechanical dinosaur for dino park  outdoor playground dinosaur replica  playground dinosaur  simulation robotic dinosaur Spinosaurus is the largest of all known carnivorous animals, nearly as large as or even larger than other theropods such as Tyrannosaurus, Giganotosaurus and Carcharodontosaurus. Estimates published in 2005, 2007, and 2008 suggested that it was between 12.6 to 18 meters (41 to 59?ft) in length and 7 to 20.9 metric tons (7.7 to 23.0 short tons) in weight. New estimates published in 2014 and 2018, based on a more complete specimen, supported the earlier research, finding that Spinosaurus could reach lengths of 15 to 16 meters (49 to 52?ft).The latest estimates suggest a weight of 6.4 to 7.5 metric tons (7.1 to 8.3 short tons). The skull of Spinosaurus was long, low and narrow, similar to that of a modern crocodilian, and bore straight conical teeth with no serrations. It would have had large, robust forelimbs bearing three-fingered hands, with an enlarged claw on the first digit. The distinctive neural spines of Spinosaurus, which were long extensions of the vertebrae (or backbones), grew to at least 1.65 meters long and were likely to have had skin connecting them, forming a sail-like structure, although some authors have suggested that the spines were covered in fat and formed a hump. Spinosaurus's hip bones were reduced, and the legs were very short in proportion to the body. Its long and narrow tail was deepened by tall, thin neural spines and elongated chevrons, forming a flexible fin or paddle-like structure. Spinosaurus is known to have eaten fish, and most scientists believe that it hunted both terrestrial and aquatic prey. Evidence suggests that it was highly semiaquatic, and lived both on land and in water much like modern crocodilians do. Spinosaurus's leg bones had osteosclerosis (high bone density), allowing for better buoyancy control, and the paddle-like tail was likely used for underwater propulsion. Multiple functions have been put forward for the dorsal sail, including thermoregulation and display; either to intimidate rivals or attract mates. Spinosaurus lived in a humid environment of tidal flats and mangrove forests alongside many other dinosaurs, as well as fish, crocodylomorphs, lizards, turtles, pterosaurs, and plesiosaurs. It is actually our accountability to satisfy your needs and effectively serve you. Your pleasure is our best reward. We're on the lookout forward for your stop by for joint growth for Electromechanical Dinosaur , Dinosaur Themed Classroom , Miniature Dinosaur Skeleton , And there are also many foreign friends who came for sight seeing, or entrust us to buy other stuff for them. You are most welcome to come to China, to our city and to our factory! China Wholesale Blue Dinosaur Chair Manufacturers Suppliers - Theme park animatronics eating fish high grade metal dinosaur sculpture – Sanhe Detail: 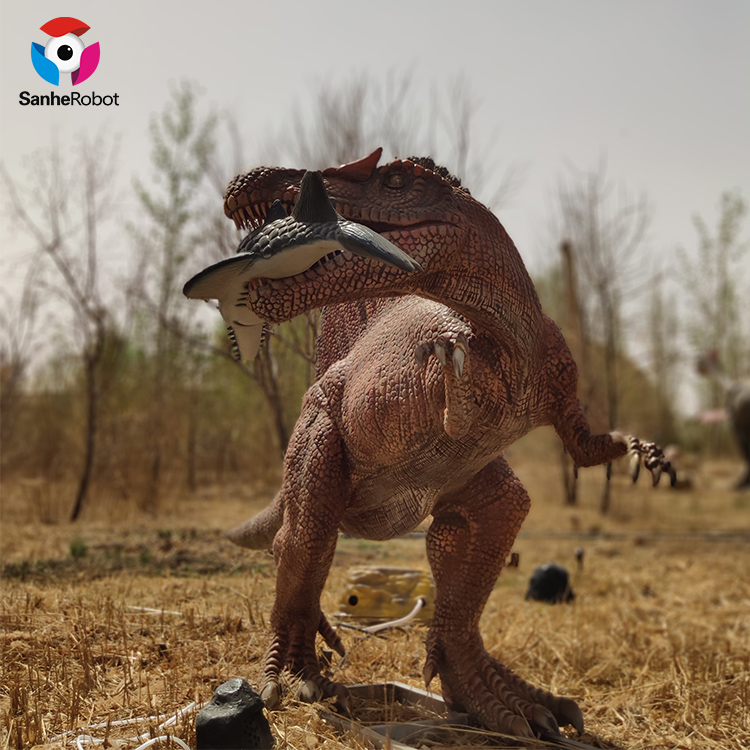 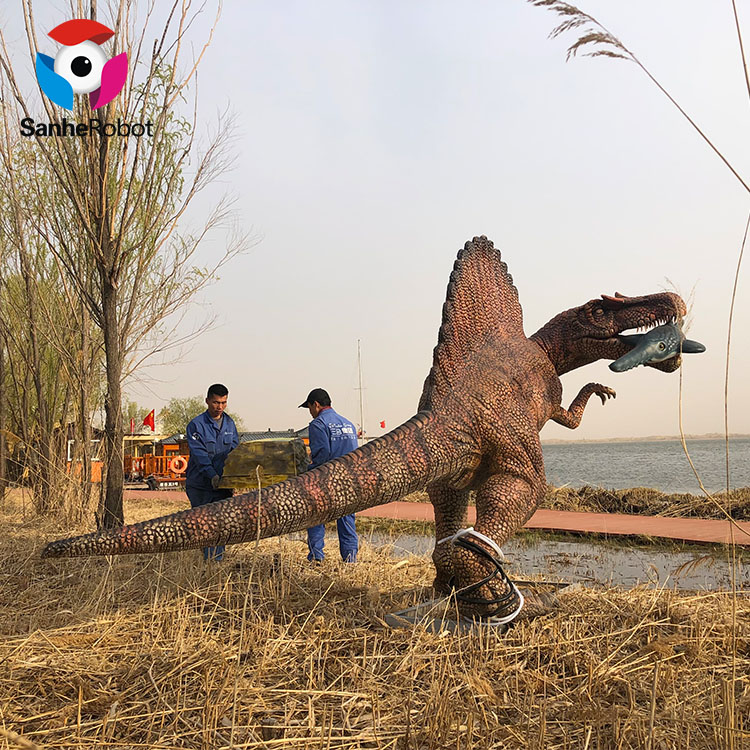 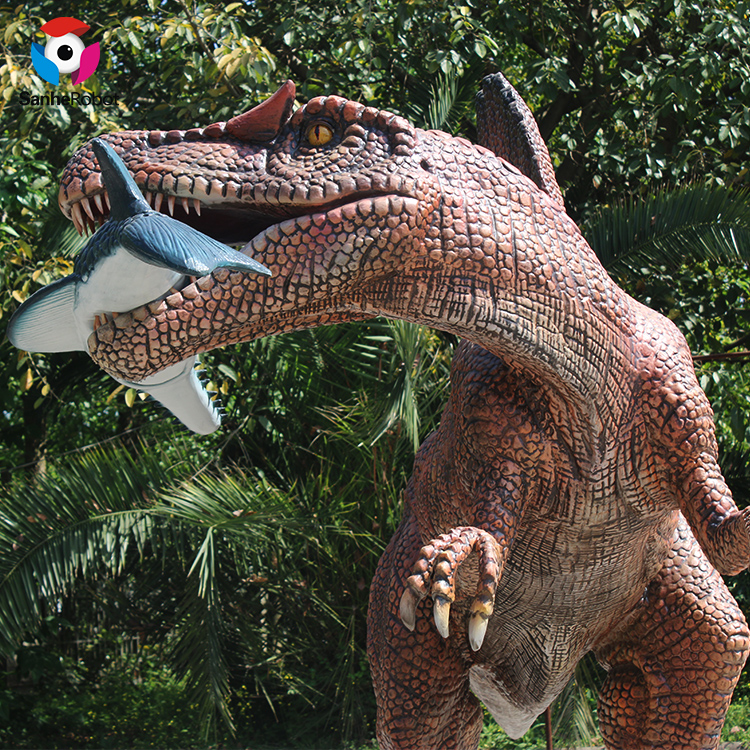 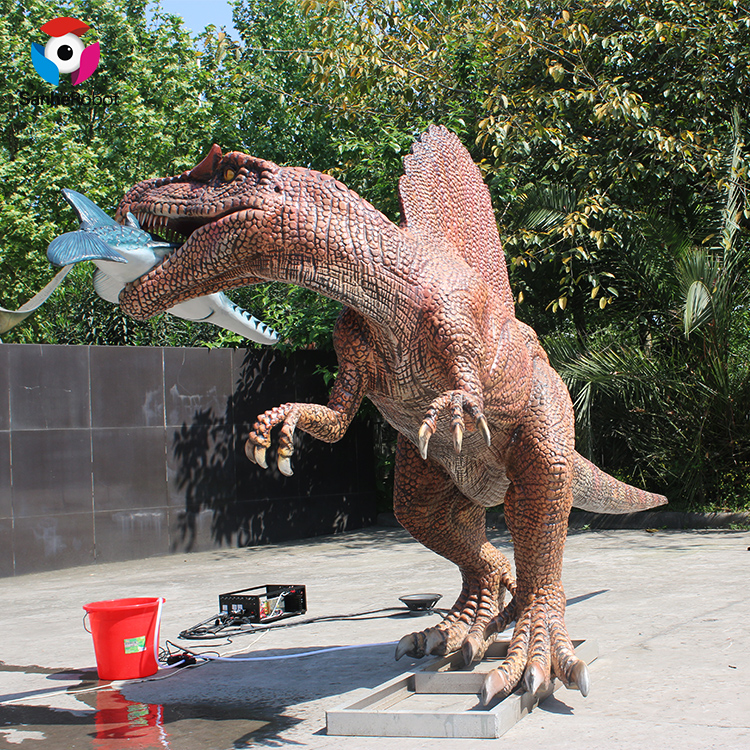 Related Product Guide:
Cooperation
We have been commitment to supply the competitive price ,excellent products and solutions high-quality, at the same time as fast delivery for China Wholesale Blue Dinosaur Chair Manufacturers Suppliers - Theme park animatronics eating fish high grade metal dinosaur sculpture – Sanhe , The product will supply to all over the world, such as: Moscow, UAE, Jordan, Since its foundation , the company keeps living up to the belief of "honest selling , best quality , people-orientation and benefits to customers. " We are doing everything to offer our customers with best services and best products . We promise that we'll be responsible all the way to the end once our services begin.
related products